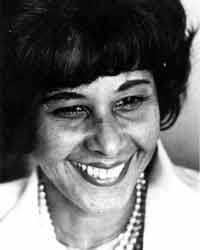 Dr. Ildaura Murillo-Rohde was instrumental in the founding of NAHN in 1975. An active member of the American Nurse Association, Ildaura was concerned that the ANA was not meeting the needs of Latino nurses. Her vision was to assist Latinas in securing their education to provide service to their community and in helping themselves.

Dr. Rohde was born in Panama on September 6th, 1920 and arrived in the U.S. in 1945. Her nursing career began in a largely Hispanic populated city of San Antonio, Texas. She found that there were few Hispanic nurses for the community. This experience promoted her determination to obtain a Bachelors of Arts degree in Psychiatric Mental Health Nursing at New York’s Columbia University. She continued with her education and obtained a Master and Doctorate degrees at New York University.

In the 1970s Dr. Rohde secured a federal position reviewing research and educational grants. She encountered the same experience as in San Antonio, no Latina nurses in academic settings in research or in public policy, and she was motivated to make change.

Dr. Rohde achieved one of nursing’s highest honors, that of a Fellowship from the American Academy of Nursing. Always active in nursing, serving as faculty, then as professor, then as Dean of Nursing at SUNY, in Brooklyn, New York, she was Dean and Professor Emeritus of SUNY’s School of Nursing. Among her other honors was being named as a permanent representative to UNICEF, New York, for the Intl. Federation of Business and Professional Woman.

Until ill health prevented her, Dr. Rohde’s was always present in the midst of NAHN conferences, and she always wore an orchid which her members provided.

The Dr. Ildaura Murillo-Rohde Award for Education Excellence by a Hispanic R.N. is presented to honor NAHN members who have distinguished themselves in any scholarship area and/or nursing education. Qualifications for this award include outstanding contributions in nursing education, research, and practice; recognized commitment to excellence in nursing; and distinguished clinical expertise.

In addition, NAHN offers the Dr. Ildaura Murillo-Rohde Scholarship for Hispanic students enrolled in a nursing program leading to licensure.

NAHN has chosen to honor and celebrate this nurse for her achievements and dedication. Dr. Rohde always inspired all who knew her.

Dr. Ildaura Murillo-Rohde passed away on September 5, 2010 in her native land of Panama.